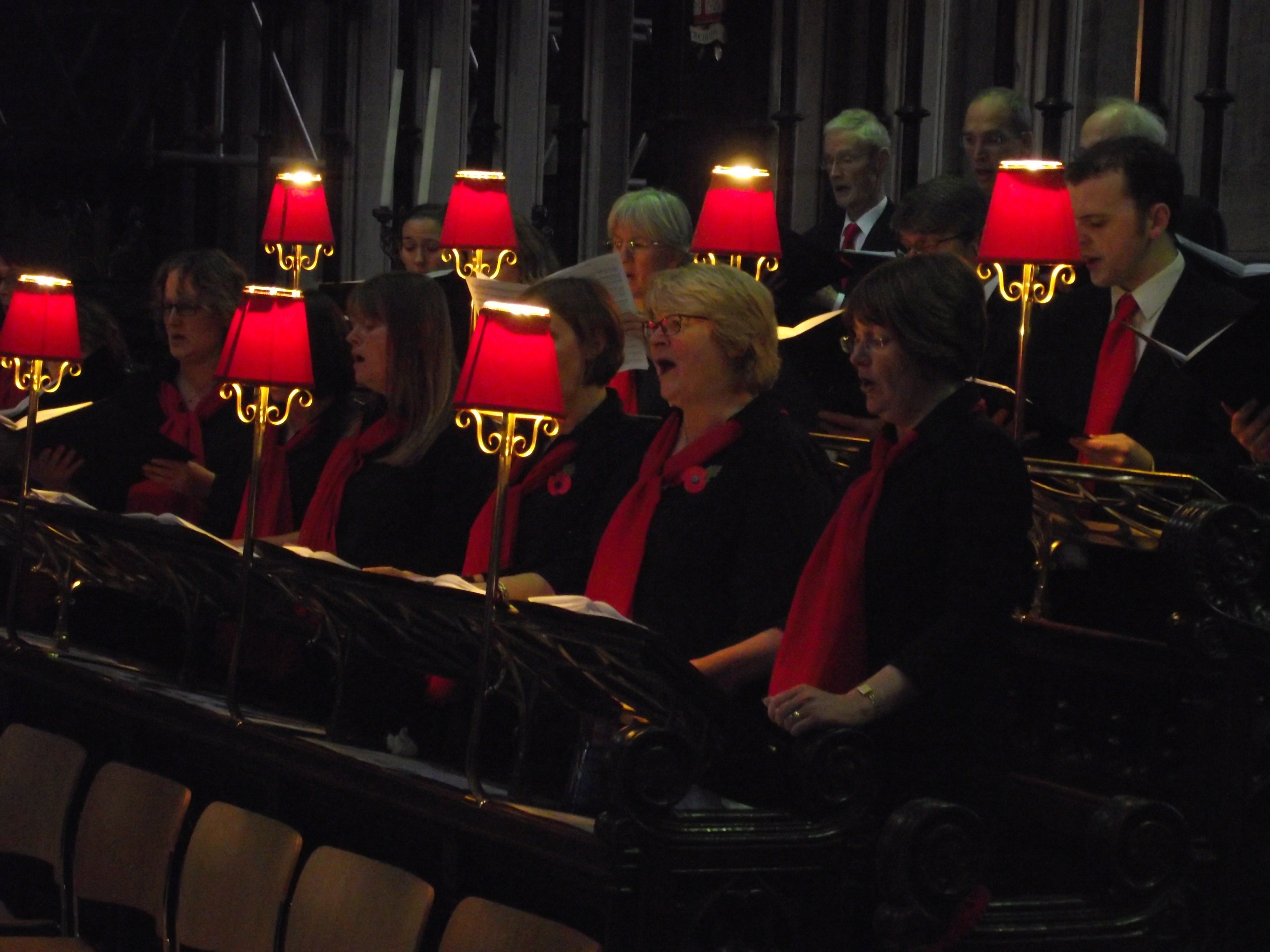 “Harlequin Singers, your mission, should you wish to accept it, is to gain access to Exeter Cathedral over the weekend of 24th-26th October and take over the singing of the Evensong and Eucharist services.
….this message will self destruct in 30 seconds, signed M (Peter M)”. 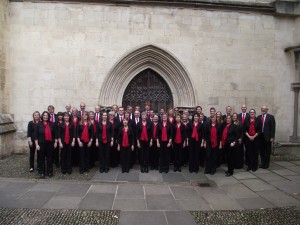 34 intrepid choir members accepted the challenge along with a select and loyal band of groupies (partners). Those of us travelling together on the coach were assembled at either 10.15 or 10.45 am prompt, depending on location, (woe betide latecomers and the ensuing wrath of Peter), on a sunny autumnal Saturday morning, ready to travel the relatively short distance down the M5 to Exeter. Heads were full of psalms, preces and responses. Even roadworks and half term traffic delays didn’t dampen our mood and enthusiasm.

As ever and as anyone who has been on a Harlequins cathedral trip knows, these events are planned down to the minute with military precision thanks to the ever organised and uber efficient Peter M who issues meticulously detailed notes. Once proceedings start, it’s all go and events throughout the weekend run like clockwork in a series of rehearsing, eating, singing, rehearsing, eating, singing……on repeat!

After finding our base in the Mercure hotel (conveniently located around the corner from the Cathedral) and getting our bearings, we all met up, present and correct, and were afforded the luxury of a rather refined start with tea and cake in the Chapter House. It just wouldn’t be a Harlequins tour without cake featuring early on, now would it? Refuelled, it wasn’t long before we got about rehearsing and the matter in hand of preparing for our first service of Saturday evensong.

Frustratingly, the organ was shrouded in scaffolding which rather obscured and dampened the sound the choir could hear from the Quire stalls, however it didn’t appear to affect our quality and we adjusted to singing in our new setting. We had a change of accompanist for this weekend, as the lovely Clare, now a regular playing for us at several concerts, joined us on organ. She did a fantastic job and it made such a difference singing and hearing the pieces with the organ, especially Charles Wood’s Magnificat and Nunc Dimittis.

Gratifyingly, the choir did not outnumber the congregation which I feared was a possibility given the lovely weather on Saturday afternoon. Before we knew it, the service was over and it was already one down, two to go, but it was pleasing that we received great positive feedback from those listening. This was really encouraging and set us up for Sunday.

With the official work done for Saturday, it was back to the hotel to relax and prepare for dinner and a chance to socialise all together. It’s something we don’t get to do too often but one of the really enjoyable aspects of a weekend away, having the opportunity and time to relax and chat with fellow members. No Harlequins social gathering would be complete without the obligatory, a cappella sing song after a meal and we ‘treated’ the hotel waiting staff to various classic (cheesy) pieces from our repertoire, including illustrious greats from Abba and Disney and at least one Musical. There was even a special one-off rousing rendition of ‘Funiculi, Funicula’ from some of the tenors and basses; it was like being transported to Italy. The trick is to ply them with wine first and the results are greatly improved!

The clocks changed on Saturday night and I’m not sure if this was a good thing or not, and possibly a recipe for disaster. It no doubt caused some consternation to Peter. It meant another hour in bed, and the temptation to stay up even later at the hotel bar and partake in revelry!!!! Hilarity and raucous behaviour descended early when some members (not the younger generation I hasten to add, and including one certain musical director) started sticking spoons to their noses…!

Would we all remember to change our watches, make it to breakfast, and be at the cathedral for 9am prompt in full choir uniform with our music??? It was a tall order, but panic over, Peter (W or M) needn’t have worried, as we were all assembled just about, bright eyed and bushy tailed (thanks to caffeine) with no evident hangovers and ready to prepare for the Sunday morning sung Eucharist. 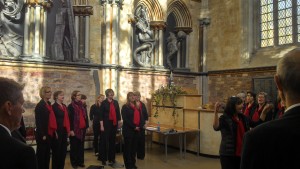 The cathedral was looking lovely as it had been decorated by local, Devon Young Farmers groups with all manner of local produce for the Harvest festival. It set the scene for the traditional harvest hymns. We started proceedings with an uplifting introit of Heilig (Mendelssohn). Singing in the main body of the church, sitting in full view of the congregation, felt quite exposed however it was a lovely acoustic to sing in and we were able to hear each other and the organ a lot better than the previous evening. On the whole our performance went well and again we received some lovely feedback afterwards from both regular cathedral goers and our band of supporters in relation to both the Hummel mass and Cesar Franck’s Panis Angelicus. I even noticed Peter smiling at us on a few occasions, so it can’t have been all bad! Peter’s official score for his performance was 8/10, not bad at all.

It was time for more food and we assembled for lunch, filling the Cathedral cafe! It was great to be joined by more Harlequin friends and family, including Rose and Becci, both currently on maternity leave who had travelled down with babies in tow, bringing the next generation of Harlequin recruits (we like to start them early!). Lovely to see them, coo over babies and again spend time socialising with each other before preparing for our final service.

Where had the time gone? I couldn’t believe we were nearing the end of a whirlwind weekend that had been so many months in the making. All the hours of planning, rehearsing and singing were nearly over. Our final and possibly biggest challenge of the weekend was revisiting the first movement of Handel’s Dixit Dominus as our finale to the evensong service. Somewhat tired and weary after a weekend of singing, the prospect of top Bs for the sopranos wasn’t something we were relishing, but all four parts made it through together and largely unscathed! 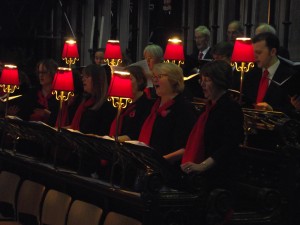 Yet again it had been another enjoyable and memorable Cathedral visit and worth all the hours of preparation and rehearsing over the past months. Everything came together – not that anyone ever doubted it would, surely???

Big thanks to our Musical Director, and of course to Peter ‘Harlequins Tour Manager’ Moore, without whose hard work none of this could have happened. Thanks also to Will who did an admirable job as cantor for our three services, including for the world premier of Peter’s responses which also were very well received.