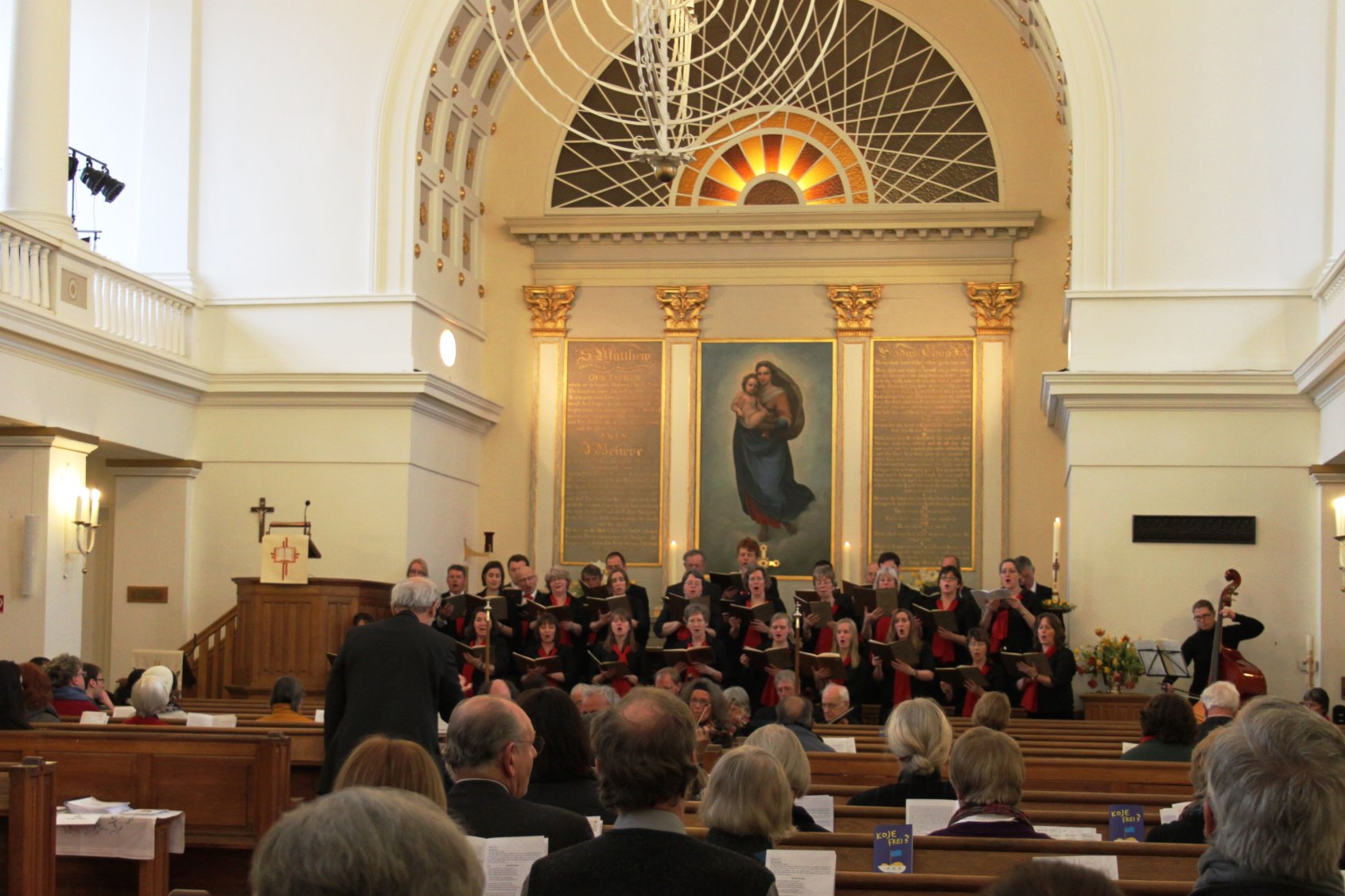 As the Harlequins boarded the bus early on Friday morning (in a very punctual manner so as to save Peter M. from severe anxiety until later in the weekend) the sense of excitement was palpable. So much so that Helena fell over in the midst of a head count and group hug!

With the appropriate number of Harlequins aboard and the location of David the driver’s parachute and life jacket made known, we set off for Hamburg.
As we didn’t have to go to Stanstead or fly with Ryanair, we had a very pleasant journey (it turns out you can get free gin on proper airlines) and were greeted at the airport by the loquacious leader of Due Quartetti, Rolf Seelmann-Eggebert. We were transported to Melanchthon kirche where we were to perform on Saturday, and enjoyed the first wave of cakes in a very cake-orientated weekend.

We met members of the resident church choir who were the main providers of aforementioned cake, and their conductor, German Alan Rickman, aka Burkhard Nehmiz. Burkhard and the choir looked after us extremely well, and the provision of local beer after rehearsal was particularly welcome! 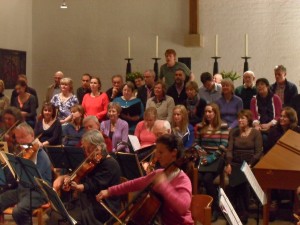 We met the Due Quartetti, some for the first time but for other Harlequins this would be the third collaboration with Rolf and his orchestra. We had our first attempt at Handel’s Dixit Dominus and once the players got used to Peter W’s “energetic” conducting style, we started to realise we might just get away with it (at one point the orchestra thought they had lost Peter altogether, but he was just crouching behind his music stand in order to get them to play quietly)!

John T and Sandy’s host for the weekend, Antonie, did a grand job filling in for the lead cellist, who was unable to make the rehearsal, and proved herself to be an invaluable orchestra member, handkerchief waver, tour guide and choir-herder over the weekend!

After an encouraging rehearsal, choir members were introduced to their German hosts and we parted ways for the evening. A small contingent sought advice from the ladies in the church choir about where to go for a drink, and the unanimous response was to head for the Reeperbahn, Hamburg’s sinful mile! We dutifully took their advice, but nearly lost Stephen H to a persistent lady of the night who seemed quite taken by him!

On Saturday morning we were free to explore the city and small clusters of Harlequins bumped into each other by the stunning Rathaus, along the harbour, in the Old Elba Tunnel and on the shores of the Alster Lake. After a harbourside lunch in the April sunshine (I’m not sure currywurst is good for you) we met up to take a bus tour of the city, kindly organised by our hosts. We were treated to stunning views of the city’s lake and the enormous houses on its shores. Our tour guide assured us that there were still members of German royalty who were not yet married if one of us took a fancy to the royal residence! 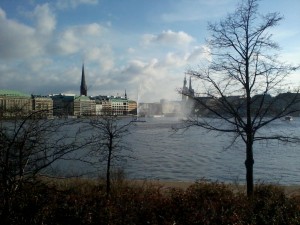 Then Rolf and Antonie managed to usher us all back to Melanchthon kirche on public transport for more rehearsal and cake before our 6 o’clock concert. Thanks to Peter M’s meticulous planning everyone had their concert dress and music ready for them at the church and all we had to do now was to perform Dixit in front of a completely full house! Which we did. Really well!

Sadly Kate was unable to perform her solo as her throat hadn’t recovered from a recent illness, and unfortunately the first violin forgot to play it instead, but apart from that I would say we were triumphant! The basses were commanding, the tenors mellifluous, the altos were [insert adjective here*] and the sopranos sweetly soared! The orchestra were a delight to play with and the audience seemed to enjoy it, even the many children that were in attendance. In the second half we, rather daringly I thought, attempted a piece in German. Rolf read out the lyrics to “Hier auf den Fluren” from Schubert’s Rosamunde to a surprising amount of laughter from the audience, so at least we knew if they laughed at us it might not be due to our accent! Thankfully though they seemed to love it and gave us a sitting ovation which lasted a full two minutes and thirty-two seconds, or thereabouts.

We also performed The Rose, accompanied by Chris G on the piano who then dashed over to the harpsichord to play a Bach Brandenburg concerto with the orchestra. Having already performed a beautiful solo with Jo, she just seemed to be showing off! We finished the concert with ye olde English madrigal, Fine Knacks (a childhood favourite of the double bass player) and Peter W’s arrangement of Eleanor Rigby, extremely fitting as Hamburg was where the Beatles learnt their trade.

After tumultuous applause and the presentation of many flowers, it was time for us to head to a local restaurant for a delicious meal courtesy of our extremely generous hosts. In his speech, Rolf told us about a pen friend he had when he was a teenager. That pen friend grew up to be David the Harlequin bass, who couldn’t join us on the trip due to his pesky daughter’s wedding, but we are very thankful to him for setting us up on our musical date!

Sandy made a thank you speech on behalf of Helena and the choir and we discovered that he is apparently very funny in German! Rolf made his fifteenth speech of the weekend and then we were able to enjoy the puddings made for us by members of the orchestra. For those of you that didn’t make it to the chocolate mousse in time, I can assure you that it was delicious. All of it. 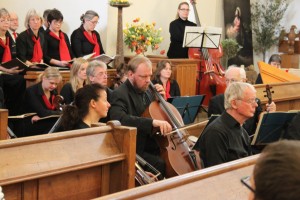 And so Saturday passed and Sunday began, accompanied by a mild chocolate/cake hangover. Our second performance of the weekend was to be in the English Church as part of their Sunday morning service. As the pews were bolted to the floor, the orchestra were arranged as though they were sitting on a bus, and Peter W. was half way down the aisle. Despite these difficulties, we got through the Dixit, finished at the same time and were greeted with … silence. The Reverend Matthew Jones advised his congregation that although they were in the middle of worship, they should feel free to applaud if they so wished. Before he finished his sentence, the cheers rang out and the choir let out a collective sigh of relief! It was particularly gratifying as Kate had recovered her voice and delivered a stunning solo.

We sang a few hymns, accompanied by Peter W on the organ, and finished the service with a rousing rendition of “Thine Be The Glory”. A cheeky key change and a glorious descant from the sopranos made the final chorus a beautiful and moving finale to our musical journey. There wasn’t a dry eye on my face!

We were then treated to the fine catering skills of the Anglican Church congregation who had prepared all “manna” of delights for us! Sandwiches, fried chicken, wali rice, bean stew, and of course, a lot… of…cake. By this stage we were in danger of falling into a food coma and missing our flight home but luckily our altruistic hosts had yet another treat in store for us. 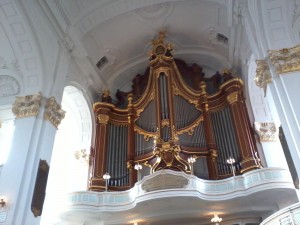 A short walk away from the English church stands Hamburg’s finest landmark, St Michaelis Lutheran church, fondly referred to as Michel. Not only did we get to look around this splendid building but we were given an intricate and fascinating history by no less than the senior pastor, Alexander Röder. Given that the church had already burnt down twice and been bombed during the war, we thought we better take a quick trip up the tower before anything else happened. Not only does the tower provide stunning panoramic views of Hamburg but it also has 452 steps going up and 445 coming down. Either it’s magic or I am not good at counting. I think it’s probably magic.

After a weekend full of delights, the time to leave had sadly come. A sobbing Antonie (artistic licence) waved us off with her red hanky and we left the beautiful city of Hamburg. Rolf was adamant that he would accompany us to the departure gate, just to make sure that we definitely left, and we wended our way home to Bristol.

* The altos have variously been described as: velvety, confident, present, better than usual, not entirely awful, looking good, better than the rest of the choir 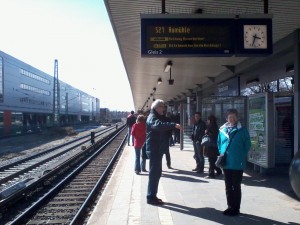